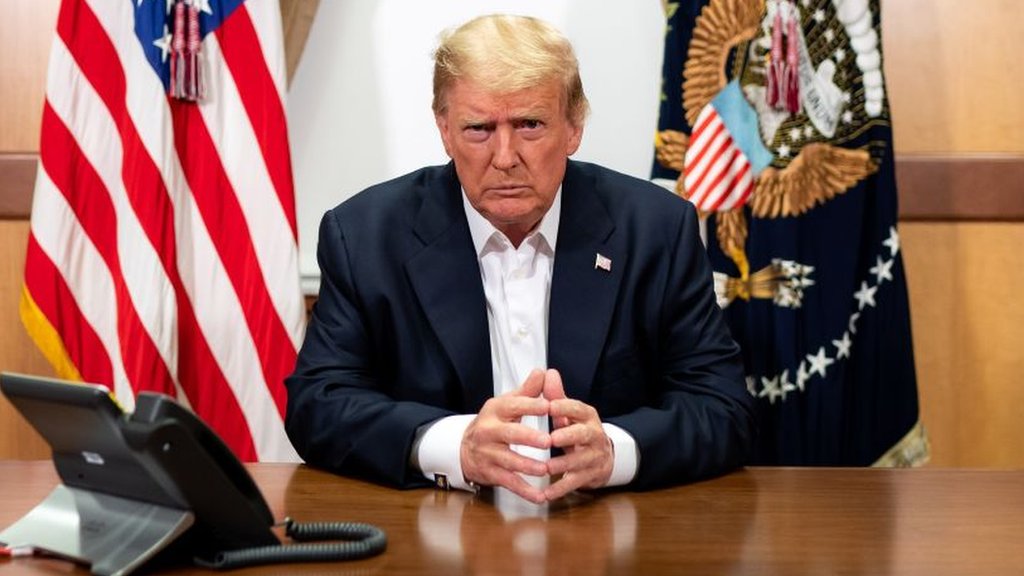 US President Donald Trump remains in hospital for treatment after testing positive for coronavirus.

The President was flown to a military hospital on Friday 2 October and a spokesperson from the White House said Mr Trump “was fatigued but in good spirits” and his doctor said “the president is doing very well.”

There have however, been concerns over comments made by his doctors that he could return home on Monday 5 October.

This is because it has been revealed that his condition might be more serious than previously thought. It has been reported that he has received extra oxygen twice, and taken the steroid treatment dexamethasone, which is normally only given to serious cases, according to experts.

On Sunday, President Trump made a surprise public appearance in a drive-past, where he was seen wearing a face-mask in the back of a sealed car, and waving at supporters.

Next month Mr Trump faces Joe Biden in the US presidential election.

Want more on US politics?

From diagnosis to discharge – a timeline of events: 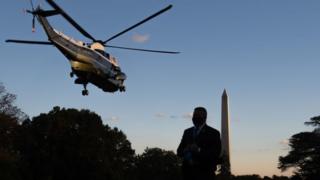 On Friday evening, US President Donald Trump departed from the South Lawn of the White House aboard presidential helicopter, Marine One. He went to Walter Reed Military Medical Center after testing positive for Covid-19

He tweeted the news: “Tonight, @FLOTUS and I tested positive for COVID-19. We will begin our quarantine and recovery process immediately. We will get through this TOGETHER!” before being flown by helicopter to the Walter Reed Military Medical Center just outside Washington.

The president’s children, Ivanka and Eric, praised him as a “warrior” and Ms Trump added: “I love you dad.”

However Mark Meadows, the White House chief of staff, said that the president’s vital signs over the last 24 hours had been “very concerning” and that the next 48 hours would be critical. 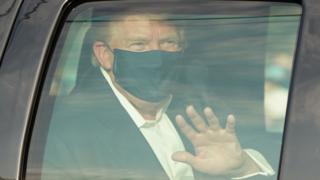 The President waved to fans from a car outside the hospital where he is receiving treatment.

4 October: President Trump made a surprise public appearance in a drive-past, where he was seen wearing a mask and waving to his supporters from inside a sealed car.

This action drew criticism from some people: “We need leadership. Not photo ops,” tweeted Hakeem Jeffries, who is the chairman of the Democrats in the US House of Representatives.

The president also shared a video of himself where he said: “I learned a lot about Covid. I learned it by really going to school. This is the real school. This isn’t the let’s read the books school. I get it and I understand it. It’s a very interesting thing, I’ll be letting you know about it.”

5 October: Will Trump be released from hospital? His doctors had previously suggested the president might be well enough to leave the hospital on Monday, however with the news that he has received oxygen and steroid treatments, we will have to wait and see.

Who else has tested positive? 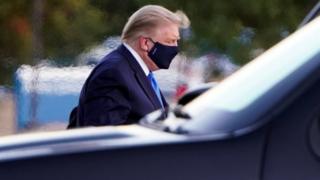 Mr Trump has been criticised for his reluctance to wear a mask and was first spotted in public with one on in July.

He’s also been photographed not socially distanced from those around him during official engagements.

Officials said the process of tracking all the people Mr Trump had been in contact with in recent days was ongoing.

Mr Biden, the Democratic nominee, wished the presidential couple a speedy recovery. “We’re all Americans and we’re all human beings and we want to make sure everybody is healthy,” he said.

What if Trump became too ill to be president? 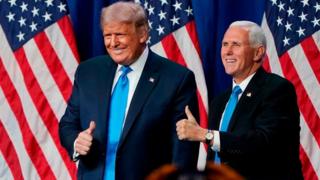 Under the US constitution, which is the rulebook that everyone in America has to follow, if Mr Trump did become too ill to carry out his duties, he could hand over his powers to the vice-president until he got better.

Under such a scenario Mr Pence – who tested negative for Covid-19 – would become acting president until Mr Trump was fit again and could go back to work.

If the president became too unwell, the cabinet and vice-president could declare him unable to continue, and Mr Pence would become president.

How will this affect the election? 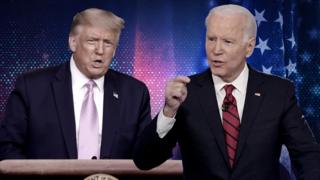 Some of Mr Trump’s campaign events had to be cancelled and there’s a big question mark over whether he will be well enough to do future events leading up to the election.

But the election can’t be delayed.

The US presidential election is held by law on the Tuesday after the first Monday of November, every four years – so this year it’s on 3 November.

Changing the date would be up to US lawmakers, and not the president. 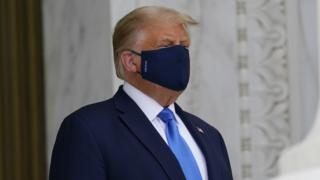 And it’s unlikely to happen as it would have to be approved by the Democratic-controlled House of Representatives.

Even if it were changed, the US constitution rules that someone can only be president for four years. So, President Trump’s term will automatically expire at noon on 20 January, 2021.

If Trump were unable to stand for election, a vote would take place to elect a new presidential nominee. This would throw up a lot of uncertainties, say experts, as millions of postal votes have already been sent out with the names of the candidates nominated by their parties.