or ω in population genetics models) is the quantitative representation of natural and sexual selection within evolutionary biology. It can be defined either with respect to a genotype or to a phenotype in a given environment. In either case, it describes individual reproductive success and is equal to the average contribution to the gene pool of the next generation that is made by individuals of the specified genotype or phenotype. The fitness of a genotype is manifested through its phenotype, which is also affected by the developmental environment. The fitness of a given phenotype can also be different in different selective environments.

With asexual reproduction, it is sufficient to assign fitnesses to genotypes. With sexual reproduction, genotypes are scrambled every generation. In this case, fitness values can be assigned to alleles by averaging over possible genetic backgrounds. Natural selection tends to make alleles with higher fitness more common over time, resulting in Darwinian evolution.

The term “Darwinian fitness” can be used to make clear the distinction with physical fitness.[1] Fitness does not include a measure of survival or life-span; Herbert Spencer’s well-known phrase “survival of the fittest” should be interpreted as: “Survival of the form (phenotypic or genotypic) that will leave the most copies of itself in successive generations.”

Fitness is often defined as a propensity or probability, rather than the actual number of offspring. For example, according to Maynard Smith, “Fitness is a property, not of an individual, but of a class of individuals—for example homozygous for allele A at a particular locus. Thus the phrase ’expected number of offspring’ means the average number, not the number produced by some one individual. If the first human infant with a gene for levitation were struck by lightning in its pram, this would not prove the new genotype to have low fitness, but only that the particular child was unlucky.” [2]

Alternatively, “the fitness of the individual—having an array x of phenotypes—is the probability, s(x), that the individual will be included among the group selected as parents of the next generation.”[3]

To avoid the complications of sex and recombination, we initially restrict our attention to an asexual population without genetic recombination. Then fitnesses can be assigned directly to genotypes rather than having to worry about individual alleles. There are two commonly used measures of fitness; absolute fitness and relative fitness.

) of a genotype is defined as the proportional change in the abundance of that genotype over one generation attributable to selection. For example, if

is the abundance of a genotype in generation

in an infinitely large population (so that there is no genetic drift), and neglecting the change in genotype abundances due to mutations, then[4]

) determines changes in genotype frequency. If

is the total population size in generation

, and the relevant genotype’s frequency is

Absolute fitnesses can be used to calculate relative fitness, since

(we have used the fact that

is the mean absolute fitness in the population). This implies that

, or in other words, relative fitness is proportional to

Assigning relative fitness values to genotypes is mathematically appropriate when two conditions are met: first, the population is at demographic equilibrium, and second, individuals vary in their birth rate, contest ability, or death rate, but not a combination of these traits.[5]

Change in genotype frequencies due to selection[edit] 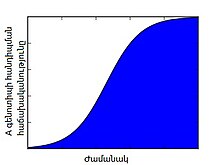 Increase in frequency over time of genotype

, which has a 1% greater relative fitness than the other genotype present,

The change in genotype frequencies due to selection follows immediately from the definition of relative fitness,

Thus, a genotype’s frequency will decline or increase depending on whether its fitness is lower or greater than the mean fitness, respectively.

In the particular case that there are only two genotypes of interest (e.g. representing the invasion of a new mutant allele), the change in genotype frequencies is often written in a different form. Suppose that two genotypes

Thus, the change in genotype

is more fit than

, and defining the selection coefficient

where the last approximation holds for

. In other words, the fitter genotype’s frequency grows approximately logistically.

The British sociologist Herbert Spencer coined the phrase “survival of the fittest” in his 1864 work Principles of Biology to characterise what Charles Darwin had called natural selection.[6]

The British biologist J.B.S. Haldane was the first to quantify fitness, in terms of the modern evolutionary synthesis of Darwinism and Mendelian genetics starting with his 1924 paper A Mathematical Theory of Natural and Artificial Selection. The next further advance was the introduction of the concept of inclusive fitness by the British biologist W.D. Hamilton in 1964 in his paper on The Genetical Evolution of Social Behaviour.

Genetic load measures the average fitness of a population of individuals, relative either to a theoretical genotype of optimal fitness, or relative to the most fit genotype actually present in the population.[7] Consider n genotypes

, which have the fitnesses

and the genotype frequencies

) may be calculated as: