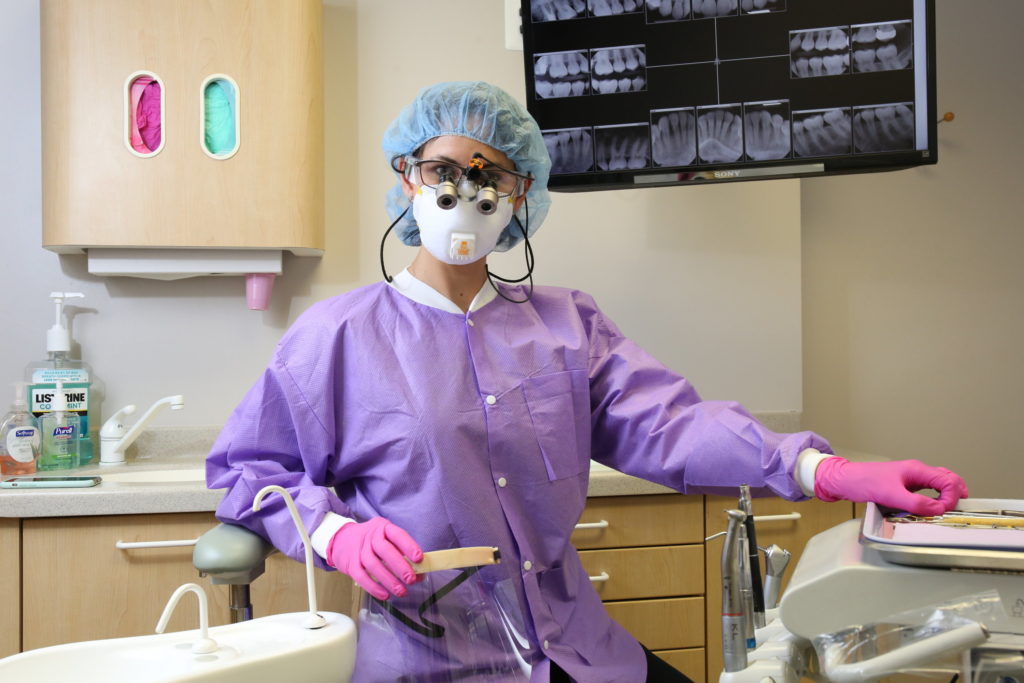 The next time you go to the dentist, don’t count on being able to catch up on People magazine in the reception area. Among the many things affected by Covid-19: the doctor’s waiting room.

“The old dental appointment where you sit and read a magazine, then get called back—that’s going to shift,” says Chevy Chase orthodontist Jill Bruno. “The days of sitting in the reception area are gone. There’s no more coffee; there are no more magazines. At least for a while.”

Dental practices, like most businesses, have had to retool because of the coronavirus—not only to protect patients and staff but to reassure patients who may be wondering: Is it a risk to go to the dentist?

The changes start from the beginning of a visit. Dentists are extracting some amenities that would be touched by multiple hands (so bring your own magazine) and are limiting the number of patients in the office—in some cases, only one is allowed in at a time. People are being asked to wait outside or in their car until getting a text or call that it’s okay to come in—and frequently someone will open the door so the visitor doesn’t touch anything. If paperwork isn’t completed electronically before the visit, a team member might deliver consent or health-information forms to a patient’s car and ask that the sheets be filled out in the parking lot.

“The goal is to minimize the time a patient is in the office and minimize contact with other patients and my team,” Bruno says.

Because patient flow will be key, to keep visitors from overlapping, appointments will be spread further apart and practices may have to be less lenient when people are late. “If they’re more than ten minutes late, they will have to reschedule,” Bruno says. “It puts other patients at risk.”

At many practices now, only the patient is allowed in for an appointment. “So if it’s an adult, that means no spouse or kids,” says Virginia orthodontist Zach Casagrande. “And if it’s a kid, we have a concierge who will walk out to the car and escort the patient into the treatment room.” Bruno still allows in an adult with a child—but only one parent, not two.

Most offices are screening patients before they show up—inquiring, for example, whether they have a cough or fever, have lost their sense of taste or smell, and have been exposed to anyone with Covid-19. Some are asking them to take their temperature before the visit. Many dental offices are also checking a patient’s temperature on arrival.

Once in the office, patients will bypass the waiting area and be taken straight to a treatment room to rinse for 30 to 60 seconds with a disinfecting solution—usually a hydrogen-peroxide mix—before anyone peers into their mouth.

Another change will be obvious once the dentist enters.

“When you see us looking like astronauts out of a sci-fi movie, it’s a little intimidating,” says Chevy Chase dentist Despina Markogiannakis, referring to all the protective gear she and her staff are now wearing—two face masks, including an N95, on top of each other; a face shield; a hair bonnet; and a disposable gown. While dentists always wore some protection in the past, in most cases it wasn’t surgical-grade.

Given that Covid-19 is transmitted via droplets in the air, dentists are paying particular attention to cutting down on spray while drilling and polishing.

“When you go to get your teeth cleaned, when they polish your teeth, that procedure kicks up a lot of aerosol,” Bruno says. “The dentist’s goal is to minimize the amount of aerosol. Maybe we won’t polish as much. Maybe you skip that part or use a slower speed.”

Pamela Marzban, a general dentist in Burke, says that for any procedure requiring a drill, she’s using DryShield, a mouthpiece that not only props open the jaw but also provides constant suction to minimize aerosol. Other dentists use Isolite, which Marzban says is similar.

Pirooz Zia, an endodontist in Chevy Chase, says more dentists may start using a dental dam: “This is something that root-canal folks, or endodontists, have to use. It’s like a raincoat that covers the mouth, and all that’s exposed is the tooth you’re working on.”

Some changes won’t be as visible to patients. Dental offices always adhered to a rigorous cleaning protocol, but now they’re being even more vigilant.

“Everything is wiped down with medical-grade wipes—basically, Clorox wipes on steroids—and then everything has to sit for five minutes before we bring in the next patient,” says Casagrande.

Dentists are also focused on the air everyone is breathing. “We’ve gotten air purifiers in the treatment rooms that have a HEPA filter that’s fine enough to capture viruses,” Zia says.

“I’m also installing a filtration system, for surgical-grade air,” says Markogiannakis. “It cleans the air six times an hour to destroy any contaminants.”

While HEPA filters have been shown to sift out particles as small as the Covid-19 virus, it’s unclear that air filtration will do anything to reduce the spread—because the science is uncertain on whether the virus lingers in the air past a six-foot radius.

“If coronavirus is being accelerated by a drill spinning at 45,000 rpm, who’s to say how far it can go?” Marzban says. “I think it’s just taking an extra precaution.”

Will all this additional security increase the cost of dental care? “That is a worry for dentists,” says Bruno. “It’s expensive—the face shields, the N95 masks, the gowns. I don’t know if you raise your fees a bit or if insurance companies will allow for an infection-control fee. I don’t know.”

The changes could also mean longer waits for appointments as offices reduce the number of patients they see daily. Marzban, for example, is treating 30 percent of the patients she would have typically seen in a day. That may increase the need—and the appeal—of virtual appointments, which don’t work in every situation but can in some.

Many orthodontists, for instance, are able to care for patients over Zoom or FaceTime. Bruno has patients take and download photos of their teeth, then set up a video or phone consultation. “I can look at the pictures and say, ‘Yes, you need more turns on your expander’ or ‘Yes, move on to the next Invisalign tray.’ Are their teeth moving well? Ninety percent of the time, I can get enough information from pictures. It reduces the visits and the time they’re in my office, to keep them and my team safe.”

During the shutdown in the spring, Casagrande was able to keep his entire staff—55 people, in his four offices—employed because 70 percent of his practice is Invisalign. For existing patients, he had digital, three-dimensional images of their teeth already in the computer, and patients could receive their next aligners by mail or curbside pickup. New patients were mailed “impression kits” that, once sent back, were scanned into 3-D files. He still needed to examine their teeth, though, so his office created a video explaining how they should take pictures of their mouths—using two spoons to separate the upper and lower lips for a clearer view.

“The great thing about this area is that people are good citizens,” says Markogiannakis. “Everyone wants to do their civic duty to get everyone through this.”

Even with the enhanced safety precautions, is it wise to go to the dentist right now for a routine cleaning? The answer varies depending on whom you ask.

A few dentists we spoke to were advising patients in high-risk groups to postpone elective or non-urgent procedures. Some, facing backlogs of patients after weeks of closure, are prioritizing more urgent cases and pushing back patients scheduled for cleanings.

Other dentists point out that even a regular checkup can be essential.

“What I don’t want to see is non-urgent procedures being put aside until they become urgent,” says Marzban. “By constantly putting off anything in dentistry, you will ultimately make it so the patient needs more dental work. For example, we have some patients with periodontal disease. If tartar isn’t taken off their teeth, it can cause their gums to bleed. Is it preventative care? Yes and no. And your oral health impacts your overall health in every way—cardiovascular disease, autoimmune issues. It’s been linked to Alzheimer’s and Parkinson’s.”

If it’s any reassurance, says Zia, “a dental environment will probably be one of the cleanest environments you’ll go into. The chance of acquiring Covid in a dental setting is going to be very, very low.”

The question, in a non-urgent situation, may come down to whether a patient is comfortable with the risk. Because although you can don a mask to walk into the practice—most dentists are requiring that visitors come in wearing one—you’ll have to take it off during treatment.

“Patients are sitting down in the chair with their mask on,” Casagrande says, and forgetting it’s covering their mouth. “It’s like, ‘Okay, time to take your mask off.’ This is all so new for us.”

Sherri Dalphonse joined Washingtonian in 1986. She is the editor in charge of such consumer topics as travel, fitness, health, finance, and beauty, as well as the editor who handles such cover stories as Great Places to Work, Best of Washington, Day Trips, Hidden Gems, Top Doctors, and Great Small Towns. She lives in DC.