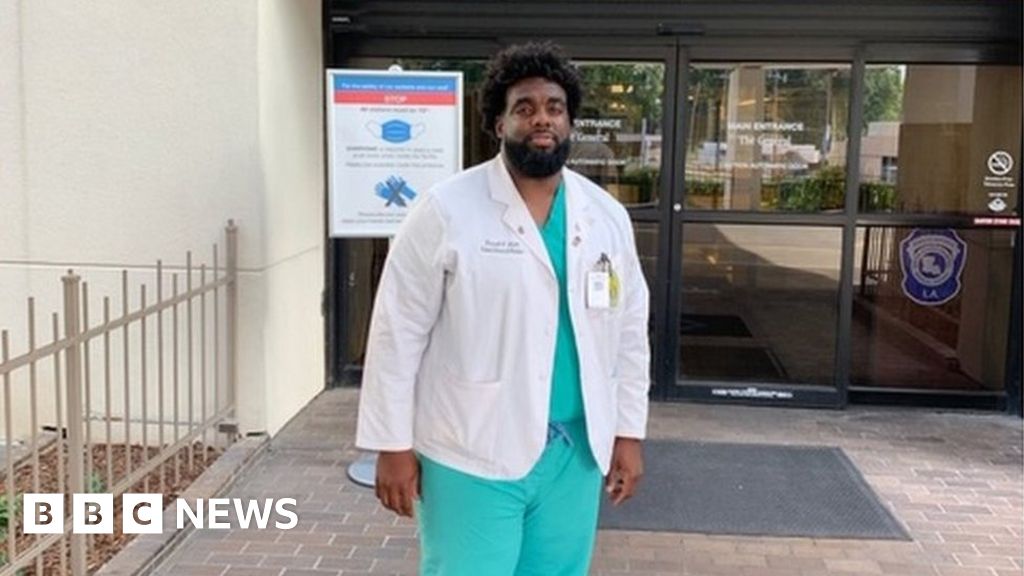 A former security guard has returned to the hospital where he used to work, but this time as a medical student.

Eleven years ago, Russell Ledet, 34, was a security guard at Baton Rouge General Medical Center, studying chemistry on flashcards on his shift.

Now, the ex-Navy intelligence officer has a PhD and is working towards a joint MD/MBA at Tulane University in his home-state of Louisiana.

His story of full-circle success has been making headlines, about a year after he rose to national attention for organising a photo of 15 black med students in front of the former slave quarters at the Whitney Plantation, a slavery museum in Louisiana.

The photograph went viral, and since then he has co-founded a company called The 15 White Coats, whose mission is to raise money for minority medical students. They also sent poster-sized copies of the photograph to schools across the US to inspire the next generation of black doctors.

“When you go ask a black kid right now what does a doctor look like, they’re going to tell you a white male. In order to change that, they got to see imagery that aligns with reality,” Mr Ledet told the BBC.

Growing up in Lake Charles, Louisiana with a single mother, Mr Ledet never thought he would go to university, let alone earn a PhD in molecular oncology or go to medical school.

As a child, he remembers combing through dumpsters with his sister to find dinner.

“I thought growing up only rich people go to college,” he says.

He enrolled in the Navy after high school because it was “a way out”.

It was in the military where he says he started meeting people who showed him that success was possible – first in Washington, DC and then in Pensacola, Florida, where he studied to be a military cryptologic technician.

“I started to realise that the world was more than where I was from,” he says.

In Pensacola he met his wife, who he says was instrumental in encouraging him to get an education.

“My wife was like ‘you’re smart as hell you just don’t know it yet’,” he remembers.

After several tours overseas, he left the Navy so that he and his wife could settle down and start a family. They moved to Baton Rouge, Louisiana in 2009, where he enrolled to study at Southern University and A&M College, a historically black college.

Although he had a full scholarship, he still had to work full time to make ends meet, so he started working as a security guard at Baton Rouge General Medical Center. He would attend classes during the day, and work from late afternoon to midnight, using any downtime to do his homework.

On Saturdays after finishing his shift, he would drive all night to Pensacola, where he was stationed as a reservist.

In the midst of it all, his first daughter was born, putting extra pressure on him to finish his degree and get a better-paying job.

He went on to earn a PhD at New York University in molecular oncology.

“I had accomplished all this stuff, and I thought: I can do anything. The world became my oyster,” he says.

His second daughter was born on 20 February, 2018 – the same day he got the news that he was accepted to Tulane University School of Medicine with a full scholarship.

Since returning to Baton Rouge General Medical Center in July as a medical student, he has reconnected with his old boss, who Mr Ledet says helped him by not firing him when he was caught studying organic chemistry during his shift.

Mr Ledet says that after medical school he wants to work in paediatrics and psychiatry, so that he can help increase access to mental-health care in poor communities.

He hopes his success will inspire other young African Americans.

“Coming from where I come from, nobody tells you that you can do things in the world, you can make an impact,” he says. “If nobody tells you, you don’t know. But now that I know I can tell the kids.”