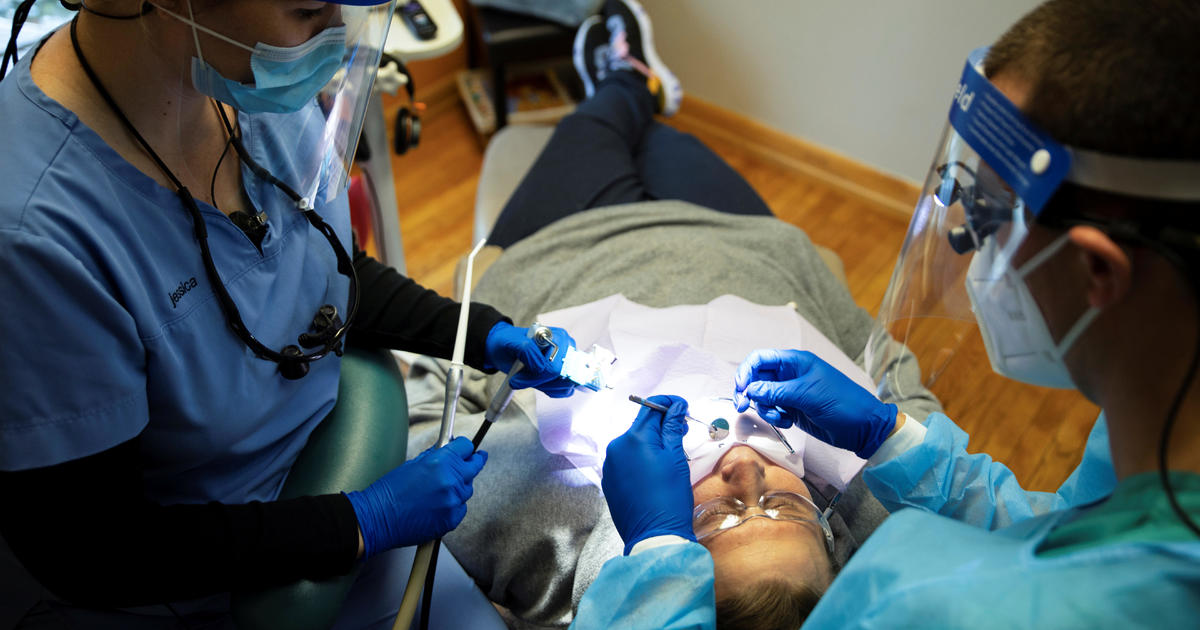 As dental offices reopen for routine care across the country — services like teeth cleanings are now allowed in 42 states — it’s not exactly business as usual for dentists and dental hygienists who mostly shut down in March as the pandemic hit.

While the rules of reopening vary state by state, dental offices providing more than emergency care were violating guidelines set by the U.S. Centers for Disease Control and Prevention and the Occupational Health and Safety Administration. On Thursday, the CDC updated its guidelines and is no longer recommending that non-emergency dental care be postponed.

But because those guidelines aren’t mandatory, dentists are looking to their state guidelines for the greenlight to reopen.

“There have been some concerns raised by many of our members, as to why are we not listening to the CDC and postponing this care?” asked Matt Crespin, president of the American Dental Hygienists’ Association, or ADHA, which represents more than 185,000 dental hygienists.

Money might be a reason. As with other small businesses, the coronavirus shutdown has hammered dental practices, with nearly 30% reporting they’d reopened to mostly lower patient volume as of early May, an American Dental Association poll of 12,00 dentists found. Just under 13% remained closed, versus nearly 19% at the end of March.

Some hygienists are set to return to work and adhere to guidance to keep themselves and patients safe, while others are expressing concerns that the advised protections are not in place, with limited supplies of protective gear.

“We do know, however, that members are being asked to return to work,” said Crespin. Those who don’t feel safe are “either quitting or they are getting fired,” he added.

In New York City, dentist Stewart Lantner is only seeing patients with emergencies while his office upgrades the air-ventilation system as part of outfitting the practice for a COVID-19 world. A temperature check awaits all entering, and “everyone has to ‘Purell’,” Lanter said of a hand-sanitizing table in the receptionist area, which now contains far fewer chairs than several months ago.

Marcelo Araujo, chief science officer at the American Dental Association, which represents more than 163,000 dentists in the U.S., advises dental offices to remove magazines and other “unnecessary items” from waiting areas. Staff should conduct phone conversations with patients before they come in, to ask if they’ve been tested for the virus and if they have had symptoms of COVID-19, Araujo said.

The biggest worry: Most dental procedures create aerosols, or what Araujo describes as “a splashing in the air of particles [from patients’ open mouths] that could include bugs like the virus.” The ADA recommends surgical masks, goggles and disposable gowns.

The association also supports dentists being able to perform COVID-19 tests on patients in the future, provided one is devised that is both reliable and practical to administer in a dental office. The ADA policy recommendation did not state how the test would be paid for.

Lantner’s newly installed office air-purification system helps rid rooms of aerosols. He’s also broken the practice’s staff into two teams of six, with a plan of each working three days of the week with Sundays off.

Still, he worries that no matter how safe the office is made, just getting there is a barrier for employees and patients.

“The scary part is more the travel in, people are afraid to take the trains, or get in the elevator with somebody else,” he said in relaying peoples’ concerns about taking public transportation to his practice’s 8th-floor suite in an office building in Manhattan.

His fears are not unfounded, according to a survey in April by the North American Dental Group, which runs 230 dental offices across the country. It found 71% of respondents to be uncomfortable going to the dentist during the pandemic for a “non-time sensitive” procedure.

In Los Angeles, Jim Bonem, 61, has been driving himself to the dentist since chipping a tooth while eating popcorn about month ago. “They probably weren’t wearing N95 masks and face shields before,” Bonem said of previous visits.

That said, his current bout of dental trips to replace two crowns leaves Bonem more concerned for his dentist and hygienist. “I’m more scared for them because of all the debris coming out of my mouth, and the spray from the drill,” he said. “I’m not putting myself at risk by inhaling my own spray.”

COVID-19 is bringing about what’s likely to be permanent change in how dental offices protect employees and patients, much as HIV and AIDS changed the way dentists and dental hygienists protected themselves three decades ago. “Prior to that, a lot of dental providers didn’t even wear gloves,” Crespin said.

Lantner offered a similar view, saying he’d graduated from dental school in the early 1990s during the AIDS epidemic, a period that had the profession taking precautionary steps including wearing masks, gloves, eyeglasses or goggles when treating patients.

But the coronavirus will lower the count of patients and staff in dental settings at the same time, Crespin noted.

“This will change the way dentistry is practiced for sure. Now, we’ll have things like longer appointment times to allow aerosols to subside, and we’ll eliminate the waiting room,” he said. “The scary part is with the amount of PPE that provider is wearing, you’re going to meet a provider who looks like an alien.”