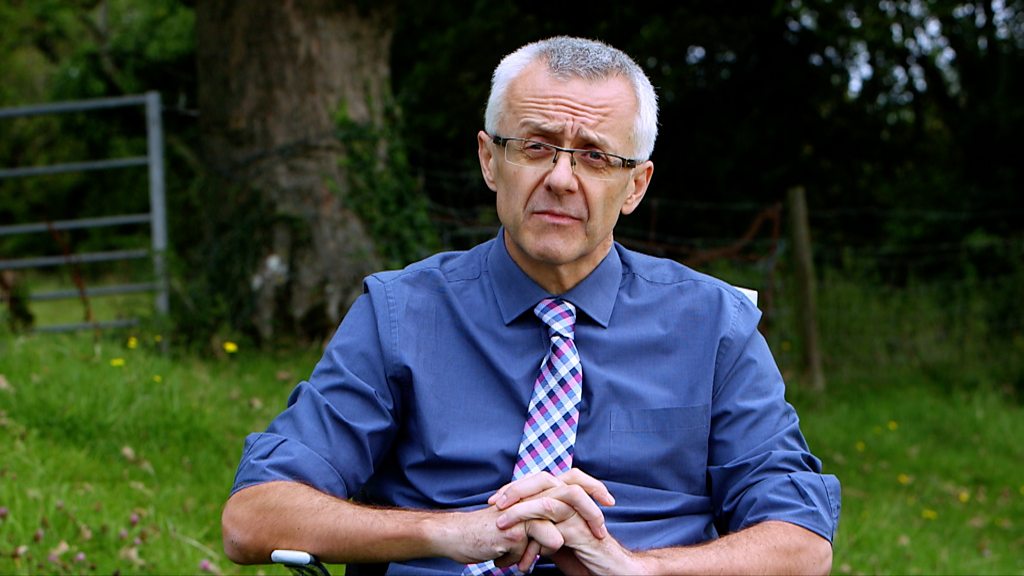 A dentist who was secretly stalked by a former patient has spoken of his shock that he was not told immediately his stalker had been released from custody.

Prosecutors said Thomas Baddeley – who was found with a “murder kit” – could only be charged with a minor offence because his victim Dr Ian Hutchinson had been unaware he was being stalked.

A scheme for informing victims when an offender is released did therefore not apply, the Ministry of Justice said.

They said protocols had been followed.

Baddeley, 42, from Bristol, secretly stalked the dentist for more than four years and was jailed for a total of 16 months in August after admitting stalking without fear, harm or intimidation and two counts of possessing offensive weapons.

An indefinite restraining order was imposed, including a ban on entering parts of Monmouthshire, with Baddeley facing up to five years’ imprisonment if he breaches it.

Earlier this month Chepstow dentist Dr Hutchinson told BBC Wales he felt “let down by the law” that Baddeley could not be charged with a more serious offence despite conducting “systematic surveillance” and having a “murder kit” of weaponry, bleach and plastic sheeting in his car.

Dr Hutchinson had been assured he would be informed when Baddeley was released, which was expected to happen sometime in the coming weeks.

But following the BBC Wales report he received a call from the probation service to let him know Baddeley had in fact been released straight after sentencing nearly four weeks earlier, due to time served on remand and delays hearing the case.

Gwent Police special protection officers are now discussing security measures with Dr Hutchinson – including the option of changing his identity and moving away.

Dr Hutchinson said it had left him feeling angry with the system and as a victim he had been treated as an “inconvenience”.

He called for changes to the law to better reflect the risk posed by his stalker.

‘The laws proved quite inadequate’

The Victims’ Commissioner, Dame Vera Baird, said, “As a victim this dentist could not have been more let down by the criminal justice system.

“I think the laws proved quite inadequate – he was clearly going to do serious harm if he had carried through what he wanted to do, and there is no charge that represents that.”

Dame Vera said she was now considering raising this with the attorney general, and Plaid Cymru MP Liz Saville-Roberts has written to the director of public prosecutions to see if this case is indicative of a wider problem.

“You get no reassurance from any of this,” added Dame Vera.

“From the inadequacy of the charge, the weakness of the sentence which follows, and then the absolute failure to tell him that theoretically this man is out, and not far away.”

‘Victims must be safeguarded’

Katy Bourne, the police and crime commissioners’ national lead on stalking, was herself a victim of the crime.

She said victims must be safeguarded throughout the criminal justice process.

“Often the perpetrator may not actually approach the victim physically, but it’s the fear of what they might do that really weighs heavily on the victim’s mind,” she said.

“I’ve spoken to victims [who] feel they’ll only be taken seriously if something physical happens against them.”

The Home Office said they were determined to tackle stalking.

“We introduced stalking protection orders in January, which protect victims and address the perpetrator’s behaviour at the earliest opportunity,” a spokesman said.

“We’ve also doubled the maximum sentences for stalking and harassment to 10 years.”