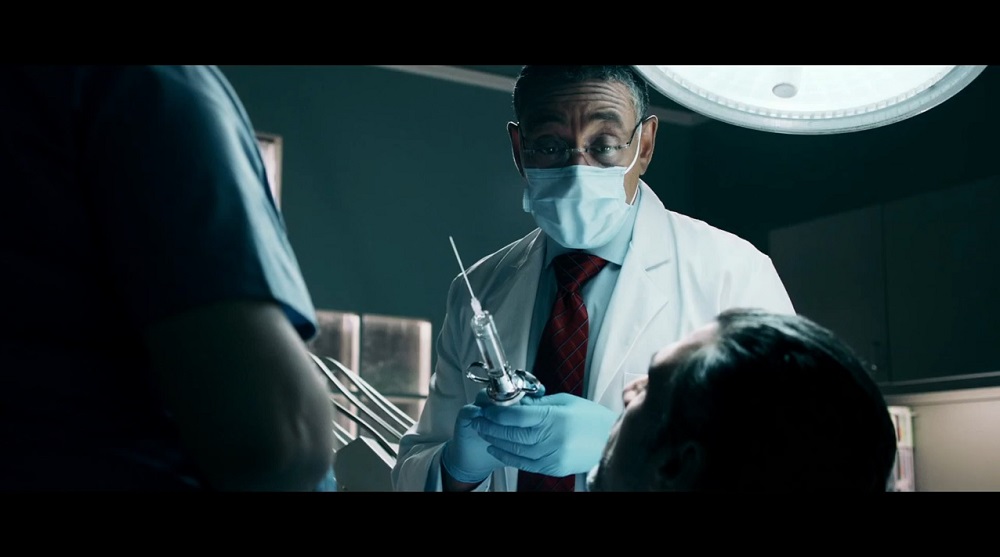 “My legal business identifies me as a practicing dentist, my real vocation is the organization of heists, or the application of criminal theory, if you will. I am a facilitator, an agent. Some choose to hide in the shadows, some behind monitors and servers, I hide in plain sight. You will hear from me when I require your specific expertise.”
—The Dentist introducing himself.

The Dentist is a supporting character, contractor, and later a main antagonist in PAYDAY 2 first introduced in the teaser trailer of the same name. At first glance, he appears to be an ordinary dentist, though it is soon revealed he uses his business as a façade to cover his criminal activities and connections.

The unusual extension of his knowledge is soon revealed when he discusses the crew’s past jobs whilst performing a dental checkup on Dallas. Acting as a stand-in for Dallas’ usual dentist, he soon alludes to Dallas’ involvement in the First World Bank and Election Day heists (see the event timeline), and, after revealing he knows Dallas uses the alias Nathan Steele, proposes they work together.

After working for him and giving The Dentist the mysterious box in the Golden Grin Casino heist, Bain had felt uneasy since his departure. His suspicions are later confirmed with The Dentist orchestrating a betrayal later on, capturing Bain and providing information to Murkywater, the PAYDAY gang’s long-time enemies. It would appear he was present in Hell’s Island, taunting the crew via loudspeakers and commanding the PMCs as they try to release and rescue Bain but flees upon realizing they would become successful in their endeavors. Before departing, he mentions three individuals who have ties with the PAYDAY gang. These are “Simmons”, implying he is aware of the politician and his affiliation, Kozak (Vlad), and Kento.

Upon solving the puzzle within the ancient, derelict underground area of The White House, The Dentist tries to stop the PAYDAY gang and holds Bain and Locke at gunpoint. Players are only given a moment to kill The Dentist before he shoots Bain.

Little is known of The Dentist, though it is made clear he is capable of gathering information on anyone (including the Payday crew). Contacting crew leader Dallas in person (rather than going through Bain like most other employers), The Dentist reveals insight to the crew’s illegal activities in order to grab his attention, and even later mentions them leaving Hoxton behind.

During his appointment with Dallas, the Dentist alludes to knowing of Dallas’ true identity, mentioning the Election Day heist, and how to break into Benevolent Bank’s vault. The Dentist mentions four potential jobs: three are seemingly huge heists on significant target locations like the Benevolent Bank, the McKendrick museum for The Diamond, and the Golden Grin Casino. A fourth operation was mentioned, and involves breaking Old Hoxton out of prison. Unlike every other contractor on Crime.net so far, The Dentist aims solely for high-risk jobs that provide the potential of large rewards; all of which require thorough planning, with the potential for various methods of execution and escape.

The most elusive of all the contractors suspected of maintaining ties to Crime.Net. If it weren’t for a handful of photographs, The Dentist might be regarded as just a myth. The first recorded mention of him was the dying breath of James “Napalm” Westmore, when his Beltway Bunch hit the Benevolent Bank in 1977.

“Tell The Dentist to go back to Hell,” he is quoted as saying.

Subsequent mentions of the name kept the legend alive, though, until very recently, there was not even a concrete description of this shadowy figure.

Additionally, these contracts were not teased in the Dentist’s introductory video, but were included post-release to provide additional insight and information about the game’s storyline.

During select heists, the Dentist can utilize his wide underground connections to call on his “favors”, small tasks done on the site, such as leaving a certain door open or positioning a vital keycard where it can be easily retrieved, by people who owed him in the past to indirectly assist the crew while on mission.

The Dentist himself only offers the service, the pre-planners still have to cover the favors’ expenses with their pocket money, and has a limit on how many of them can be used during a job, so as to not draw too much attention to the operation with certain favors costing more “points” than others, presumably due to their considerably higher-profile.