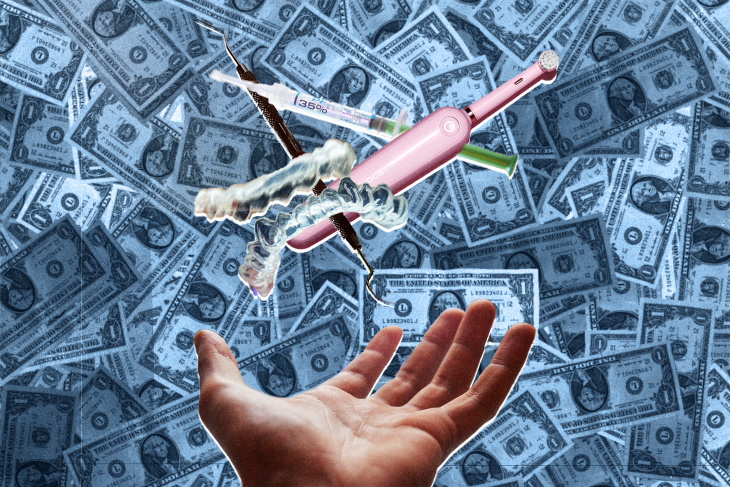 Our news is free on LAist. To make sure you get our coverage: Sign up for our daily newsletters. To support our non-profit public service journalism: Donate Now.

Even in a normal year, I try my best to avoid the dentist. It’s not just the physical pain, but the financial hit my bank account takes each visit.

With coronavirus raging through Southeast Los Angeles, the last place I wanted to be was in a dental chair in a Cudahy strip mall with my mouth uncovered and wide open. But that’s where I was Tuesday, staring at a wall painted like a pink princess castle, wondering how much money I was losing on this risky business.

It couldn’t be helped. I was in agony the entire weekend with a bad toothache so when Monday rolled around, I knew I needed medical attention. The problem was I had no idea who my dental insurance provider was, or if I even had dental insurance. I hadn’t been in a while.

The snafu led me to three different dentists in two days and cost me close to $2,000 — even after I found my dental insurance card.

The experience also led me down a rabbit hole into our dental health system, where I discovered that Black and Latino people are more likely to have dental health issues primarily due to a lack of information and access to preventive oral care.

This, and that the system is basically set up to cost you proportionally for your pain.

The price tag on dental health can be thousands of dollars. Even if you have decent insurance, it can wipe out your whole savings account. For many of us, the COVID-19 recession has already done that.

Thanks to what my dentist called a “failed root canal” at some point in my past, I found myself in a situation not uncommon in Latino and Black communities, where the pandemic has only heightened a disparity in oral health.

This has to do with two factors: one is about a lack of knowledge about preventive care and the other is about access to dental health care.

And these two feed each other. Since Latino and Black adults tend to have less information about dental care, they go to the dentist less often, and that leads to expensive problems later on. The hefty price tag associated with dental work, in turn, dissuades them from going to the dentist to begin with.

Latinos in particular tend to lack dental insurance compared to other adults.

According to a CDC report from 2017, just 17.5% of Hispanic adults have dental insurance.

The pandemic and resulting economy has likely expanded this gap, especially in California, where we have some 2 million people who lack legal immigration status, leaving their health care options severely limited at a time when many are without work.

A recent UCLA report on the economic impact of COVD-19 on California reads, “As many as 22% of Blacks and 26% of Latinos were jobless, compared to 17% of both white and Asian workers.” It goes on to say that about 750,000 people in the state are jobless and undocumented because of the pandemic.

It’s a disparity I heard about and experienced in real time this week as I talked to Black and Brown folks standing outside dental offices in Paramount, Cudahy and Norwalk.

COVERAGE FOR THE UNDEREMPLOYED

Melinda, a Black woman I met outside a Norwalk dental office, told me she had recently lost her retail job and was on her COBRA insurance. She was there for a teeth cleaning, trying to use what she could of her extended health benefits before they ran out.

She said her insurance would cover a basic cleaning with a $50 deductible. The cleaning is a preventive measure, much like flossing and brushing your teeth is. It’s also one of the most common dental treatments, according to my sister Cynthia, who is a dental hygienist.

“As long as you go in for your regular cleaning at least twice a year and floss and brush daily, you can avoid expensive dental problems,” Cynthia told me.

The importance of a dental cleaning as a way to save me a ton of money down the line had never struck me before. That information is incredibly important, but difficult to disseminate to working-class adults in communities of color who have limited funds, little or no coverage, and are just plain busy.

Citing a 2019 CDC study, an Aug. 4 article in U.S. News reported “a decline in recent years in the prevalence of untreated tooth decay in the primary teeth of Black and Mexican American children, and the same for the permanent teeth of adolescents and teens.” Good news there. However, it went on: “But there was a lack of similar progress for adults, and disparities remained.”

WHY IS THE DENTIST SO EXPENSIVE?

But this isn’t just about an information gap. Access to good dentists tends to be harder for people who are part of California’s service, or so-called “gig,” economy.

Freelancers or contract workers like Miguel, a former Uber driver I spoke with, sometimes make too much money to qualify for even basic dental coverage under the state’s MediCal program. Miguel told me he had to apply for dental credit to pay to get a painful cavity taken care of.

That’s because lower-end dental insurance seems to be designed to really only cover routine maintenance, not costly major oral issues.

Writing for HuffPost, Wendell Potter, a former health insurance executive, noted that dental coverage typically has a cap of about $1,500 per year.

“Many of us who do have dental insurance postpone visits to the dentist because of the cost,” Potter said. “This often puts our health in jeopardy because of the close connection between oral health and overall health.”

My latest trip to the dentist to treat my bad tooth pain already put me well past that limit. And just getting someone to see me was an odyssey in itself.

Finally, I went to a dentist in Cudahay who didn’t require a paper card as proof of my insurance. But he did require a couple of thousand dollars to cover the procedure, which was beyond what my dental insurance would cover.

I don’t really have $2,000 lying around in case my lower right molar ever needed a new root canal — which, turns out, it did need. So I had to apply for dental credit. I did right there on an iPad they provided just for the occasion. The process was easy and seamless, because they’ve done it hundreds of times. If I pay it back within the year, they won’t charge me interest.

I got approved for a credit line, took my face mask off, went into a room with a pink castle painted on the wall, and sat in a chair with my mouth wide open.

About the Mis Ángeles column: Erick Galindo is chronicling life in Los Angeles for LAist. He took on this role after serving as our immigrant communities reporter. Erick came to us last year from LA Taco, where he was the managing editor of a James Beard award-winning staff.