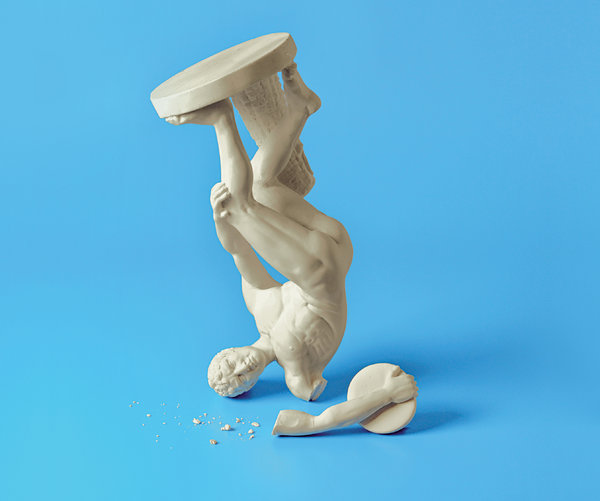 A blond woman in a hot pink spandex tank hoists a sledgehammer over her shoulders, then slams it down with a dull thud onto the big tire in front of her. Beside her, another woman swings her sledgehammer even higher, grimacing and groaning with the effort. Their faces are bright red and dripping with sweat. It’s 9:45 a.m. and 85 degrees, and the sun is glinting off the asphalt of the strip-mall parking lot where the women are laboring.”Swing it higher, above your shoulder!” a woman bellows at them, even as they gasp each time they raise their hammers, each time they let them fall.

As one woman pauses to wipe the sweat from her eyes, she spots me studying her. I’ve been trying not to stare, but it’s a strange spectacle, this John Henry workout of theirs, hammering away in front of a women’s fitness center, just a few doors down from a smoke shop and a hair salon. It looks exhausting, and more than a little dangerous. (What if a sledgehammer slips and flies from one woman’s hands, braining her companion?) It also looks fruitless. Why not join a roofing crew for a few hours instead? Surely, there’s a tunnel somewhere that needs digging, or at least some hot tar that needs pouring.

But paying to simulate backbreaking labor under the watchful eye of a demanding authority figure seems to be a common desire these days. When I type “sledgehammer” into Google later that day, the first suggestion is “sledgehammer workout,” a search term that pours forth half a dozen enthusiastic re-enactments of life on a steel-driving chain gang.

Fitness culture couldn’t have changed more significantly since the late ’60s. Back then, residents of my small Southern hometown would spot my father, an early jogger, and yell out of their car windows, “Keep running, hippie!” These days there aren’t that many joggers in my Los Angeles neighborhood, but every other block there’s another fitness center offering boot-camp classes or Brazilian jiujitsu, with people inside punching, kicking and yelling at one another like drill sergeants. Jim Fixx’s freewheeling running disciples have been replaced by packs of would-be Navy SEALs, sprinting up sandy hillsides with backpacks full of rocks strapped to their shoulders.

Jane Fonda and Richard Simmons once painted exercise as something fun and faintly sexy — a lighthearted trip to a sweaty nightclub in your own living room — but fitness today isn’t supposed to be easy. The “Abdomenizer” and “8-Minute Abs” videos, which practically suggested that exercise could be squeezed in between bites of your hamburger, are now quaint punch lines. By the ’90s, when the soft curves of Ursula Andress had been replaced by the hard bodies of Cindy Crawford and Elle Macpherson, you still worked out to prepare for the beach or the bedroom. These days, though, you aren’t preparing for fun or romance. You’re preparing for an unforeseen natural disaster, or a burning building, or Armageddon.

“We have sought to build a program that will best prepare trainees for any physical contingency — not only for the unknown, but for the unknowable.” This dark talk passes for welcoming language on the website of CrossFit, the intense, ultracompetitive conditioning program whose motto, “Forging Elite Fitness,” reflects our current fascination with both elite athletes and elite military forces. In spite of (or because of) the fact that CrossFit is now nearly synonymous with overexertion, there are more than 6,000 affiliates in the United States.

Those stunned by CrossFit’s growing popularity are often surprised, given its high price, to discover its spartan ethos: Each “box” (its lingo for gym) is often just a big empty room with medicine balls, barbells and wooden boxes stacked along the walls. Workouts rotate daily but tend to involve free weights, sprints and enough squats to cripple Charles Atlas. In keeping with its apocalyptic mission statement, the program encourages camaraderie under duress (CrossFitters coach each other through the pain) and competition (names and scores are scrawled on a wipe board and sometimes posted online).

Despite the inherent risks of hundreds of thousands of people dabbling in Olympic weight-lifting techniques at their local strip malls, CrossFitters seem utterly dedicated to their hard-core workouts. CrossFit’s founder, Greg Glassman, admitted in 2005 that rhabdomyolysis — a dangerous condition that can lead to kidney failure — had popped up among a few new CrossFit converts. He viewed it, in part, as evidence of CrossFit’s “dominance over traditional training protocols.” This type of conditioning was important not just for body tone but also for responding to future calamity. “Nature, combat and emergency can demand high volumes of work performed quickly for success or for survival,” Glassman wrote. “Until others join CrossFit in preparing athletes for this reality, the exertional rhabdo problem will be ours to shoulder alone.” The ideal world, in other words, is populated by pumped-up gladiators, prepared to battle anything. And the path to this world is necessarily lined with E.R. visits.

CrossFitters represent just one wave of a fitness sea change, in which well-to-do Americans abandon easy, convenient forms of exercise in favor of workouts grueling enough to resemble a kind of physical atonement. For the most privileged among us, freedom seems to feel oppressive, and oppression feels like freedom. There’s also a very American fixation on extremes at play: More is always better. If you’re running just four miles a day and doing a few pull-ups, you’re a wimp compared with the buff dude who’s ready for an appearance on “American Ninja Warrior.” It’s hard not to feel awe when you watch a middle-aged woman in a Never Quit T-shirt clean-and-jerk huge weights. And it’s hardly a stretch to go from lifting a 35-pound kettlebell to wondering why you can’t run half a mile with it, especially when a CrossFit coach is right there, urging you to “crush it.” Common wisdom seems to dictate that it’s not enough to look good and feel good if you’re not prepared to lift a Mini Cooper off an injured stranger.

The whole notion of pushing your physical limits — popularized by early Nike ads, Navy SEAL mythos and Lance Armstrong’s cult of personality — has attained a religiosity that’s as passionate as it is pervasive. The “extreme” version of anything is now widely assumed to be an improvement on the original rather than a perverse amplification of it. And as with most of sports culture, there is no gray area. You win or you lose. You leave it all on the floor or you shamefully skulk off the floor with extra gas in your tank.

But our new religion has more than a little in common with the religions that brought our ancestors to America in the first place. Like the idealists and extremists who founded this country, the modern zealots of exercise turn their backs on the indulgences of our culture, seeking solace in self-abnegation and suffering. “This is the route to a better life,” they tell us, gesturing at their sledgehammers and their kettlebells, their military drills and their dramatic re-enactments of hard labor. And in these uncertain times, it doesn’t sound so bad to be prepared for some coming disaster — or even for an actual job doing hard labor, if our empire ever falls.

It makes sense that for those segments of humanity who aren’t fighting for survival every day of their lives, the new definition of fulfillment is feeling as if you’re about to die. Maybe that’s the point. If we aren’t lugging five gallons of water back from a well 10 miles away or slamming a hammer into a mountainside, something feels as if it’s missing. Who wants to sit alone at a desk all day, then work out alone on a machine? Why can’t we suffer and sweat together, as a group, in a way that feels meaningful? Why can’t someone yell at us while we do it? For the privileged, maybe the most grueling path seems the most likely to lead to divinity. When I run on Sunday mornings, I pass seven packed, bustling fitness boutiques, and five nearly empty churches.